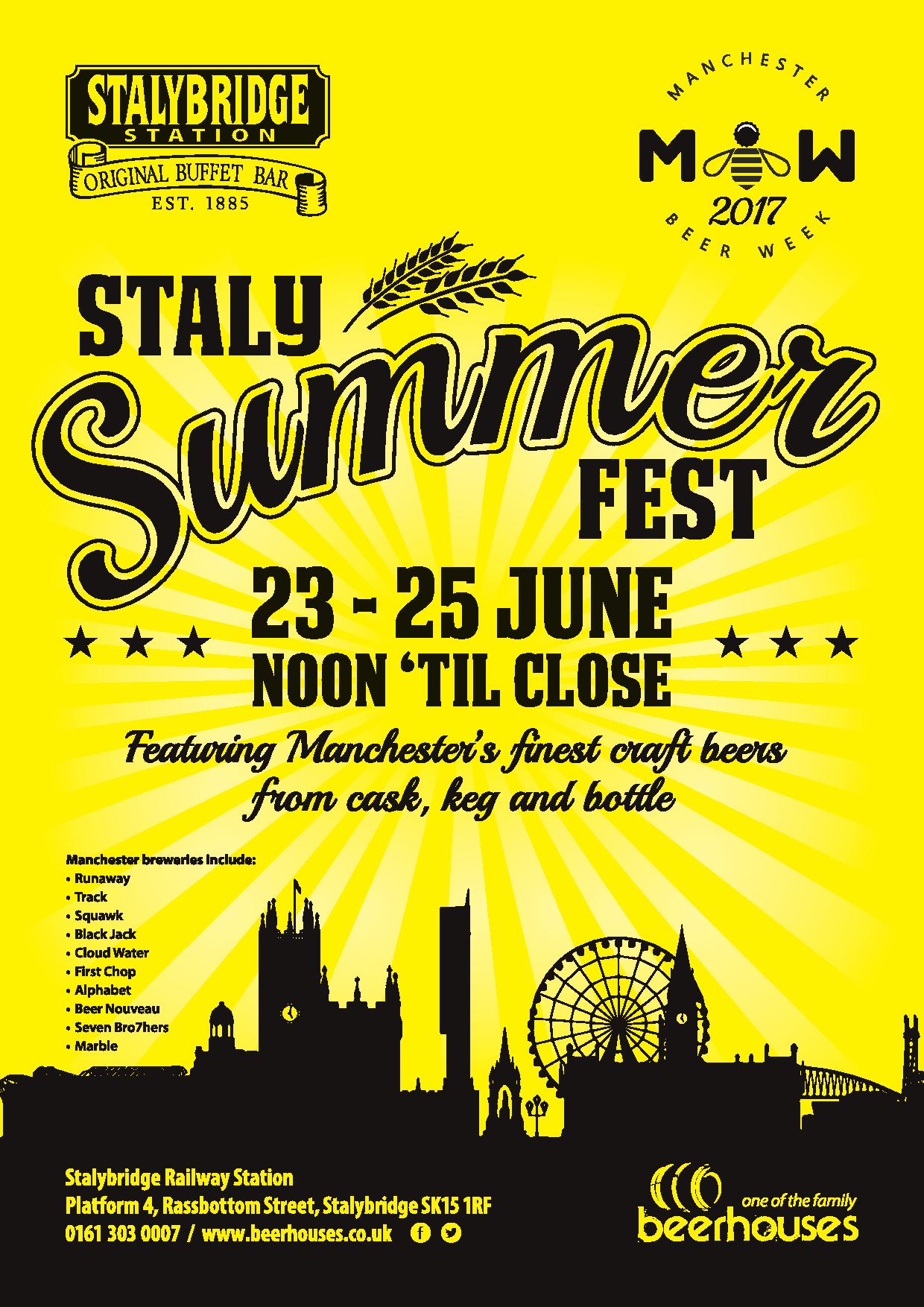 This year we’ve planned our beer festival to tie in with Manchester Beer week, which runs from June 23 to July 2, 2017.  In support we will be featuring Manchester’s finest craft beers.  from cask, keg and bottle. Expect to see on the bar Runaway, Track, Squawk, Black Jack, Cloud Water, First Chop, Alphabet, Beer Nouveau, Seven Bro7hers and Marble

Manchester is Britain’s best beer city and we’ve got the proof.

An estimated 10,000 visitors attended a whopping 94 events during the inaugural Manchester Beer Week and that was just the start. We’re back in 2017, bringing a whole new series of exclusive events, one-off beers and general good times.

Not only will we celebrate the cream of Manchester’s brewing talent but we will also welcome some of the best brewers from across the UK and even further afield. Expect special tastings, talks, historical walks, beer-inspired meals and a whole lot more as we transform the city into a celebration of our country’s favourite drink.

TRACK – Sonoma 3.9% ABV, Pale. Sonoma is a juicy, bright dry ale. Hopped extensively with centennial Citra and mosaic hops. Designed to be a taste of sunshine with late citrus fruit aroma and finish.

MANCHESTER BREW Co. – SMASH 5.0% ABV, a SMASH beer (that’s “Single Malt and Single Hop) brewed with Maris Otter malt and Mosaic hops, made with the superstars from Pie and Ale

MARBLE – Pint 3.9% ABV, session ale. Brewed with an all pale malt and then hopped with a blend of New Zealand and US hops. A benchmark beer that promises a burst of zesty aromas, uplifting grapefruit flavours and a subtle lemongrass finish

BEER NOUVEAU – Government Ale 3.7% ABV, session ale. A very easy drinking session ale with a little history thrown in made by following a recipe dating back to the 1800’s.

SQUAWK – oat pale 4.5% ABV, Golden Ale. There is a tangy lemon note along with a resinous hint.Tastes of grapefruit, spicy orange, maybe slight mango with subtle creaminess from the oats and grain in the background

FIRST CHOP – Mango Pale 4.0& ABV Pale amber. Not a fruit beer, a beer with fruit. The malt base creates a sweetness to compliment the mango infusion. A lot of late hopping with Chinook and Cascade gives a juxtaposing bitterness that balances this beer to perfection. Hopped with Citra, Chinook, Cascade & Citra hops plus fresh mangoes

MARBLE – Manchester bitter, 4.2% ABV Trad English Ale. A beer that is inspired by the legendary Boddingtons bitter. Using a touch of caramalt to give it a straw-like colour and a robust base perfect for displaying a balanced and restrained hop profile East Kent Goldings give a traditional English bitterness, NZ Motueka & Waimea offer a zingy floral lift.

MARBLE – Liquid Cuddle 6.5% ABV, Maibock. Have you ever had a hop hug? This is a liquid cuddle. Brewed in collaboration with Yeastie Boys, this NZ Maibock spills a kaleidoscope of passion fruit, citrus and Melon Ball followed by a toasty aromatic finish.

SQUAWK – Session IPA 4.5% ABV. A session IPA hopped with Amarillo. Rich and golden with a fruity berry sweetness and a lingering bitter finish.

Food delights over the weekend will be Asian street food, available Friday and Saturday 11-8

All buns served with Parmesan and rosemary sweet potato fries