We are very proud to sponsor the shirts for Thackley AFC, we wish the team the best of luck in the season ahead.

BRIEF CLUB HISTORY
Thackley AFC was founded in 1930 by the younger members of Thackley Wesleyan Methodist Church. Progressing by way of the Bradford Mutual Sunday School League and the Bradford Amateur League, the club reached the West Riding County Amateur League in 1939. During the 25 years that followed, Thackley AFC won the championship title on five separate occasions and, in 1964, secured the prestigious West Riding County Challenge Cup.
After a brief foray into the West Yorkshire League, the club in 1967 (after again lifting the West Riding County Challenge Cup) gained admission to the all-powerful Yorkshire League and, in both 1974 and 1975, enhanced its reputation still further by winning the illustrious West Riding County Cup.
A founder member of the Northern Counties East Football League in 1982, Thackley AFC has retained a Premier Division place in every season since (the only club to have done so). The century-old Bradford and District FA Senior Cup has returned to Thackley on no fewer than 13 occasions a competition record.progressing to the Football League include Ian Ormondroyd, the former Bradford City, Aston Villa and Leicester City striker Players . 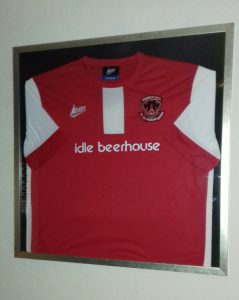