All hands on the pump for Beerhouses’ 25th Anniversary celebrations.

To celebrate 25 years since founder Mike Field served the very first pint at the West Riding Refreshment Rooms, the team at Beerhouses has launched a very special year of events – with all the proceeds going to local charities.

It all started with an idea to turn a set of dilapidated, unloved waiting rooms at Dewsbury train station into something that commuters and the local community could use and enjoy. 25 years on, the group behind the West Riding Refreshment Rooms can boast a chain of six award winning pubs, which also includes The Old Turk in Dewsbury and The Sportsman Inn in Huddersfield.

To celebrate its silver anniversary, Beerhouses will host a series of special fundraising events across the year, with all the proceeds being split between Kirkwood Hospice, Candlelighters and Ben’s Music Foundation. 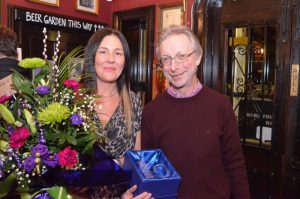 The team at West Riding Refreshment Rooms kicked off their year of fundraising in January with an all day celebration. Staff handed out free food to patrons, offered 25% discount on drinks and sold Black Sheep at 1994 prices throughout the day.

They have commissioned Elland Brewery to create an exclusive beer, Line Four, to celebrate the landmark year, with 10p from every pint sold going to the chosen charities, as well as creating their own gin with Jacqsons of Huddersfield from which 25p a drink will also be donated.

Barry Shaw, Operations Manager for Beerhouses, is proud to be celebrating 25 years. He says that both customers and the team wanted to support local causes throughout the year.

“We are delighted to be celebrating this landmark year. We employ nearly 90 people across the different pubs and most of them live locally so we are a real part of our communities. We also have a great relationship with lots of local suppliers, who we have worked closely with for many years. So we think that it should be the same for the charities we support too!

Kirkwood Hospice, Candlelighters & Ben’s Music Foundation are local to our pubs and lots of people who come in are touched by cancer and other life limiting illnesses. We want to make sure we keep the money we raise local.” 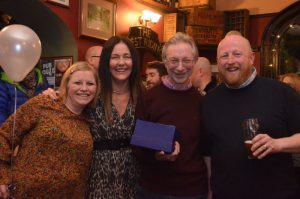 The Beerhouses team at their 25th Anniversary celebration event.

Beerhouses first venture was The West Riding Refreshment Rooms, located at the entrance to the Dewsbury Train Station. The idea of Dewsbury born founder Mike Field, the pub was transformed from a series of unloved and abandoned waiting rooms and opened to the general public in 1994.

By 2006 its growing reputation as the venue to enjoy a well-kept pint of real ale was rewarded with second place in the CAMRA National Pub of the Year awards. During its 25 years trading, it has won many awards for its beer as well as featuring in the Good Beer Guide every year.

According to Barry Shaw, the secret to Beerhouses success has been its willingness to adapt and change.

“As well as real ales and craft beers, we now sell lots of different gins, which we try to source locally. We like to support local independent and artisan producers wherever we can. There are some amazing local brewers and distillers doing great things.

“You’ve got to try new things and adapt to what people want, whilst making sure that you continue to focus on maintaining the quality of beer that people expect.” 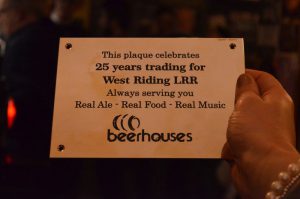 A special plaque to celebrate 25 years of trading at the West Riding Refreshment Rooms.

As well as special events in a number of the group’s pubs throughout the year, the team will be taking on a series of challenges to raise funds for its chosen charities. And they have even published a book.

“We’ve got lots of ideas we’re currently working on.” said Barry. “We’re currently planning a walk from Stalybridge Buffet Bar to Dewsbury in early May. We’re also going to take on the Three Peaks Challenge and cycle from Liverpool back to Dewsbury along the Leeds Liverpool canal to help boost our fundraising efforts.

“We’d be delighted to hear from any of our customers or the general public if they have their own fundraising ideas to support our charities. Why not pop in to one of our pubs and speak to the team!”

“Special thanks goes to Christine Wood, who has written and published a gripping short story called ‘Dead Hard’ to help raise money. It’s set here at the West Riding Refreshments Rooms and it’s already become a best seller at the bar!”